The Weaver of Life! 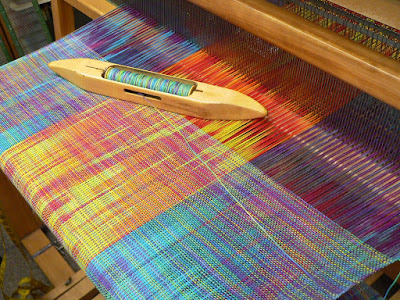 But Ruth replied: Don’t plead with me to abandon you or to return and not follow you. For wherever you go, I will go, and wherever you live, I will live; your people will be my people, and your God will be my God. Where you die, I will die, and there I will be buried. May the Lord punish me, and do so severely, if anything but death separates you and me. Ruth 1:16-17

“Life is but a Weaving”

“My life is but a weaving Between my God and me. I cannot choose the colors He weaveth steadily. Oft’ times He weaveth sorrow; And I in foolish pride. Forget He sees the upper And I the underside. Not ’til the loom is silent And the shuttles cease to fly Will God unroll the canvas And reveal the reason why.

He knows, He loves, He cares; Nothing this truth can dim.
He gives the very best to those Who leave the choice to Him.” -Corrie ten Boom

A young family (Who questioned the weaver of life) had attempted to leave a desolate land behind, a famine had prefaced the relocation, what was to be a short time away from home, stretched into 10 years.

In those ten years heart breaking tragedy resulted in three deaths, all men, that left three widows wondering what to do next.  A mother-in Law named Naomi, and two daughters in law (Orpah, and Ruth) faced a dilemma. The mother in law insisted that the young women move on with their lives, find new husbands.

One did just that, but the other young woman refused to leave, and together those two broken hearted women, put one step in front of another, the threads of their lives, seemed to be raveling., but perception will not prove to be reality!

The book of Ruth describes a romance, that triumphed over race and religious barriers. Its been described as a laboratory demonstration, that the greatest of all virtues is love! Those curiously the word “Love”  is not found in the book, but the theme and the thread is woven in to each chapter!

Ruth's emphatic decision to stay....is recorded in "Poetic prose" of the highest order.

Don’t plead with me to abandon you or to return and not follow you. For wherever you go, I will go, and wherever you live, I will live; your people will be my people, and your God will be my God. Where you die, I will die, and there I will be buried. May the Lord punish me, and do so severely, if anything but death separates you and me.

Her words are familiar to most everyone! We have heard this passage countless times at weddings! The sentiment is striking! This describes a desired relationship that is anything but seasonal!

Ruth was determined to stay with the woman who had lost everything. She knew what that felt like and they were in this thing together.

And so they began to make the 7-10 day journey from the plains of Moab to the town of Bethlehem. It was only a little over 30 miles.

As one writer noted: It seemed so close but the dry, dusty and treacherous terrain seemed to mirror what was in Naomi’s heart.

She is bitter and broken over the death of her husband, and sons! Deep down she had profound doubts that the weaver of life, cared at all!

I read this week that:

It was a dangerous journey for the two women to take. They were vulnerable widows taking a trip few women dare to take without a man during those chaotic and often violent days when judges ruled. For Naomi and Ruth, there were no street lights, no paved roads, no rest stops and no security. They were easy prey for the bandits in the bushes – and then there was the Jordan River to cross and the 2,000 foot slope they had to climb – but these women were determined to make it home.

I appreciated a gifted writers application:

The journey home is always better with someone to help you along the way. No matter how far we stray, coming home is easier when we walk hand-in-hand together.

Going home may take humility and it may be a treacherous trip, but it’s always worth it! Naomi left in search of food during a famine, but now she was returning with empty arms and a broken heart. Perhaps she was wondering if she should have ever went to Moab in the first place. But the minute her foot stepped on Bethlehem soil, she was home and like Dorothy, Naomi knew – there’s no place like home!

Where are you on your journey?  Have you wondered far from God in search of something somewhere over the rainbow? Are you in the middle of your journey home and in need of a helping hand? *https://donotdepart.com/naomis-journey-home

The weaver of life is ready and wanting to direct your steps!

Popular posts from this blog

In Honor of Peter Marshall.

In Memory of a Man who was after God's own heart. As a younger minister my heart warmed to His preaching, (From recorded sermons) the soaring diction, the impassioned eloquent proclamation of truth, through a life consumed by Christ!

As a middle aged Pastor now, the memory of this incomparable Preacher continues to inspire!

I am so looking forward to meeting Dr. Marshall in heaven! Few people in my life's journey have touched me as deeply as the late Peter Marshall.

Here is just a sample of his profound way of turning a phrase...

• A different world cannot be built by indifferent people.

• Give to us clear vision that we may know where to stand and what to stand for - because unless we stand for something, we shall fall for anything.

• God will not permit any troubles to come upon us, unless He has a specific plan by which great blessing can come out of the difficulty.

• If you hug to yourself any resentment against anybody else, you destroy the bridge by which God would come to…
Read more

The Breath behind the Flag!

Wow! What an incredible and moving collection of words! I am writing this on a rainy Fourth of July afternoon in Wyoming.  I am thinking about the men and women who have served our country.  I never had the opportunity to serve in the military. I came very close, as a senior in high school, I had signed up to join the Air Force.

Before heading up to Fitzsimons hospital in Denver for a full physical my recruiter decided to weigh me.

This was way before I was ever introduced to Baptist Potlucks! I weighed 191lbs! Oh how I would like to weigh that now….but I digest…I mean digress:) I was six pounds overweight!  The recruiter told me to drop the pounds and come back…I lost the weight in a …
Read more

No! I know wha…
Read more